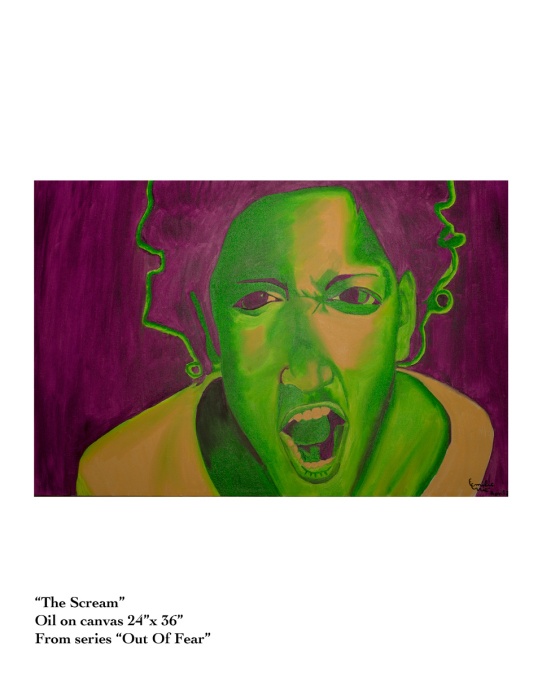 [We Were Friends by Alexa Reed, The Scream by Emilie Errié]

We used to be friends. I mean, you were never my best friend. That’s Bridget, you know that. But after she and Mark got married, she didn’t have as much time to hang out and you like the same music as me, so we started hanging out more these last few months.

You would text me when you were going to the bar near my apartment and tell me the first one was on you. I would invite you whenever I went to that diner by your house and you would come by even if you’d already had food. You said “I can always eat dessert” and somehow we both ended up staying at the diner longer than I had planned because there always seemed to be something to talk about.

You would talk about whatever girl you were seeing that week and I would talk about Eddie. You were always willing to listen even when he wasn’t. That relationship was toxic in so many ways and I didn’t realize it soon enough but when I did I felt relief and sadness in equal measures. It was like a splinter had been removed, but the wound still needed time to heal.

Instead, you pounced on it. You came in and started talking about how this was great because it meant that I was single for the first time since we’d met and I should consider you. You started telling me what a nice guy you were, how you were there to help me move, how you always took care of me, how you would be so much better to me than he was, how you knew what I needed because you’d been listening to me for so long.

Now you complain that I put you in the Friendzone, as if that were a real place. The Friendzone is located somewhere on the other side of Narnia and seems to be populated only by men who thought that being nice to women would result in sex or otherwise it wasn’t worth their time.

HOW DARE YOU? How dare you find my heart when it was beaten and rip through it with your selfish needs? How dare you complain that friendship alone wasn’t a good enough reason to hang out with me? How dare you get angry because I didn’t uphold my end of some contract you created and didn’t tell me about? How dare you treat our friendship as some undercover spy job, as if you could detect the secret code that would unlock my vulva? You’d ask about my day, you always knew how to make me laugh, you made me think you actually cared, and then you took all of that away in one night.

So after the fight (and by the way, you’re so lucky I didn’t throw anything at you because I don’t even have words for how much I wanted to), I end up crying in Bridget’s kitchen. And then she tells me that she’s always thought you and I would be good together and she doesn’t understand why I wouldn’t try. And Mark says, “Yeah, after all the time the guy’s put in, doesn’t he deserve it?” Like my love is some kind of salary to be paid out.

I had to leave. So now I’m at home, and my heart is broken from Eddie, and I can’t go to Bridget because she and Mark are on the other side of some wall that I can’t see over. And I can’t go to you because I just found out that everything you’d ever done with or for me was designed to get me to be something I don’t want to be. And I feel like the biggest fool that ever there was because all of this time, I thought you were doing it just because we were friends.

[Emilie Errié is an artist whose work is filled with personal expressions and the exploration of the unknown. She enjoys working with ideas and finds great rewards in the overall artistic process.  She obtained her Bachelor’s in Photography and wishes to continue her artistic journey by pursuing an MFA]

[Alexa Reed is a white, Queer, agender, Vegan Atheist Socialist who hopes that zir words will help to dismantle the kyriarchy. Meanwhile, ze lives in Malden in zir cat Serenity, an adoptee with leukemia, sharp claws, and lots of energy. They enjoy snuggling in bed, cuddling on the couch, and sitting together in the office chair (Alexa typing while Serenity purrs from atop the headrest). Alexa’s other hobbies include posting on Facebook, yelling at the television, cooking, baking, and eating Vegan-friendly food. Ze started the Facebook account (linked) in an attempt to take zir writing seriously. Ze hopes to be part of 5 shows and 5 publications in 2017 and will announce all of them through that Facebook account.]