The cries for momma

You lie in a strange bed

In a strange room

In a strange house

Your mind reaches out for truth

Desperately clawing at memories past

Seeking the answer to your only question

What did I Do?

You were ripped from your mother’s arm

As you screamed out her name

Call out to you.

She just kept on sleeping.

The lady was nice

In this strange home.

You would be ok

They would take care of you

The lady was nice

But she was not your mom

You look at the window

And you knew at that moment

You would never go home.

Angela McClintock is the Director of the Jefferson County Department of Human Resources in Birmingham, Alabama.  Working with Families in Crisis is her passion and life calling.
Writing as a woman about the struggles of those who care for others brings me a calm fulfillment.  I write two blogs.  Water for Camels encourages Social Workers to keep up the good fight despite adversity, thanklessness and stress.  The other blog (from whence this poem originated) is called: The things I have seen and is published at Things I Have Seen: Blogging About Real Life.  this blog is much more personal and speaks to events and observations of my life. 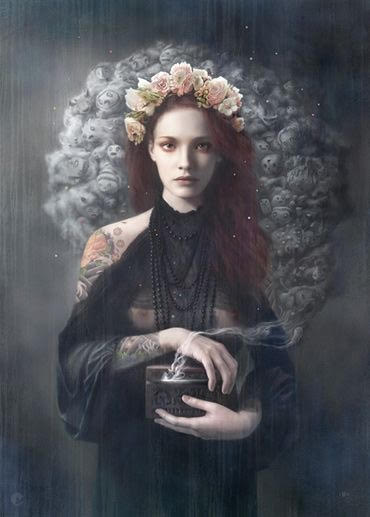 She attempts to stand
upon uneven ground
atop a broken earth divide,
awkwardly balancing
between woman and child

Fissures of inheritance
the infectious bane
of her own existence,
formed beneath calloused soles
of sister, mother, grandmother

Charms contained within
the broken locket placed
delicate around her neck;
sacred curse of ancestry adorned,
yet blessed by envious men

They emerge in procession
seeking temporary resolve
within the brimstone depths of
her fractured earth pedestal; built
by brother, father, grandfather

Instinctively she continues
heart blind and bound
planting seeds of trust, inside
the empty moral vessel
of a nutrient void society

Bedded upon a shroud
of ivory bridal linens,
virgin hope buried in white
between quivering legs; her
ever consuming crimson tide
an ossuary proclaimed by men

Sabrina Escorcio was born to Italian Catholic immigrant parents in the beautiful Niagara region in Ontario, Canada. Surrounded by nature and raised on a self-sustaining farm, nature and faith are two predominant themes often appearing in her work.

She grew up with a love for nature, the dramatic arts, music, as well as books and literature. After years of journaling Sabrina came to know poetry, as an adult this became an avenue of self-expression during a time of personal strife.

This hunger for poetry was insatiable, leading her to scour second hand book stores for more inspiration. There she found classic authors such as Percy Shelley, Tennyson, and Sylvia Plath, as well as many obscure poets; She began to transform her journaling into the realm of confessional poetry.

One of her favourite pieces is titled “Dark Pines Under Water” written by the Canadian poet Gwendolyn Mac Ewen. Sabrina hopes to feature her poetry in print one day, she can be found on Tumblr http://brie-writes.tumblr.com/, WordPress at sabrinaescorciosblog.wordpreess.com, Instagram at http://instagram.com/sabrina_escorcio_2018, and Facebook at http://www.facebook.com/sabrinaescorciosblog/.

[Another powerful poem by our powerhouse of a poet,Christine Ray!]